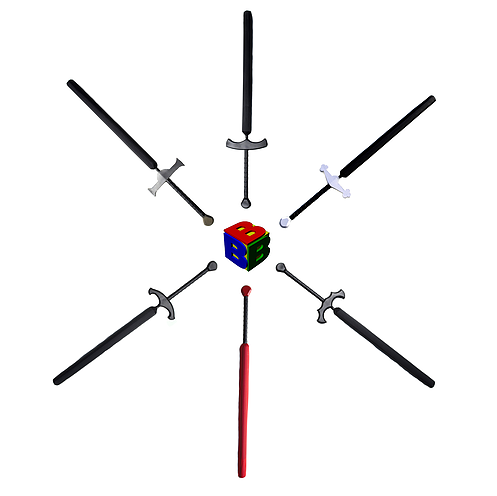 A Premiere Maker Space for LARPers and SCAdians alike

Before we take a look at B3 Imagination Studios in depth we need to have a quick rehash of New England LARPing Lore, some of which I will probably get a touch wrong but hopefully in a positive-embellishment fashion. I remember Ben Becker, the owner of B3 (we’ll let you guess what the third “B” stands for – there should probably be a prize or something shouldn’t there?) once telling me that within a few hours of attending his first NERO game he knew he wanted to run an event, own a chapter, and extensively expand the hobby and he did just that, only not under the auspices of NERO because, seriously, who likes screaming continual damage at each other? 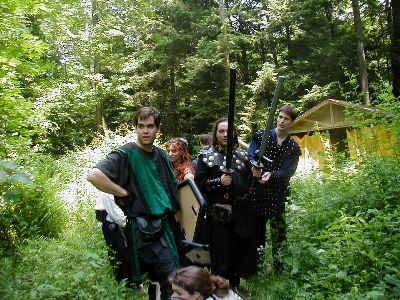 (Ben, considering his options at the Epic! LARP in Western Mass.)

While I wasn’t present for the early, corn-starch and PVC days (nor do I understand the oft-expressed desire to return to them – kind of like going back to the 50’s without the segregation and cholera, I suppose) one can imagine Ben being present for/inventing such things as the kite-tape long sword, the oft-copied “I’m a Fighter” battle-dress of Black BDUs and a Tabard, and the standard for pole-arm fighting techniques.

Out of the mean-spirited diaspora that was early NERO Ben made his first invention; a re-usable .38 caliber foam ball that could be fired out of paintball markers. With this creation in hand he (and several others) generated the background of the first Accelerant (then called nTeraction) LARP to support his creativity – the Atlas Agenda, a post-apocalyptic game shockingly ahead of its time. While the two can claim no actual creative roots it’s interesting to note how similar the background of the much-later game Dystopia Rising has to this earlier foray into the genre. Combining actual ranged paintball combat with New England Sport LARPing, the Atlas Agenda created the first unique, crossover experience that I attended (yup, I was a paintball player before attending my first LARP). 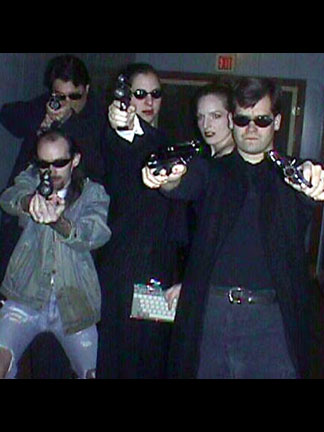 About this time Ben earned a professional Degree in (Foam) Engineering and began working at packaging companies around New England, giving him access to high tech, precision tools such as CNC Routers and Water Jet Cutters almost a decade before the modern-day ‘maker movement’ selfied its way into existence. His original business, the Adventurer’s Outlet, ran for a number of years, primarily selling high quality combat reps to games around New England but, with the whorish spread of NERO, eventually across a good chunk of the US.

During this period of activity Ben created a number of other LARP props, from light-weight foam shields to impressively carved, muzzle loading wooden pistols and rifles that utilized Action Balls. These, in turn, were supported by the follow-up game to Atlas Agenda; Atlas Adventures, which was uniquely set in Morocco in the 1930s and by the one-season Roanoke game run by Truax McFarland of MASI and set in, you guessed in the Roanoke Colony of Virginia. Continuing this theme, Ben created mobile air-pressure cannons for use at the Pirates! LARP and then a whole host of foam and wooden set pieces (including the oft-referenced “Cliffy Head”) for the Vikings LARP and, currently the Zombies! Aftershock occasional event.

From there, Ben made a push into the SCA (supplying Ice Falcon Armory with a few items) and stepped away from the continuous LARP schedule for a few years. The Adventurer’s Outlet closed up shop and, aside from one of the glass cases in the foyer of the tavern at Ye Olde Commons, what had become the Cadillac of LARP weapons simply became unavailable. Eventually even that was sold out and the space was taken over by Alyssa Marion’s Lotus Armory. Even I resorted to making larger and larger quantities of serviceable but sub-standard weapons (excepting Staves…my Staves kick ass) for several games, including Realm of Requiem, Steam and Cinders, LIONE and Terres Rising and a whole host of participant requests from across the US. They weren’t pretty, but it was pretty much all we had.

About 6 months ago, I got a random e-mail from Ben detailing what would be his re-entry back into the world of LARPing and LARP related products. He had named it the B3 Imagination Studios and pitched it as a collaborative maker space for those interested in learning both LARP and SCA-related crafts with a bent towards using higher-end, industrial tools to both mass produce quality items and create unique one off designs. Hiring Alyssa Marion as his first employee, Ben spent a good deal of the spring setting up his space, traveling to Ohio to purchase and build his own Industrial Water Jet Cutter and preparing to open up the Studio full time.

What does B3 Imagination Studios Provide?

B3 is taking a three pronged approach. Firstly, the LARP weapons that we’d all grown to know and love over the years are coming back in stock. Alyssa will be taking their selection on the road this fall to various games right alongside her “competition series” blades from Lotus Armory and, indeed, both products just popped up as available at http://www.b3is.com/shop. A contest is currently in the works for visitors to design their own pommel and cross-guard combination and, eventually, every B3 item will be completely customizable via the website – allowing for over 1,000 different combinations of lengths, cross-guard designs, pommels and colors, from Dark Fantasy to Gear-based Steampunk creations. At the same time, production will continue on a select amount of SCA related items.

The second prong of B3 is to create a membership driven maker space available to those who want to take their crafting efforts off their couch and/or want their garage back and not to keep accidentally spray painting their lawn and/or driveway and/or child. While this program is not yet available we got a sneak peek at some of the tools that will be available to use at their 3,500 square foot facility in Grafton, Ma. These include an Industrial Water Jet Cutter with the ability to cut not only foam but steel and even leather; a CNC Table Router for woodworking or more detailed foam projects, a massive band-saw, vac-forming table, heat gun stations, and a complete ventilated spray booth. Because a number of these tools require extensive training B3 will be including small classes and personalized instruction in the membership fee with the ultimate goal of allowing the Studio to run without Ben’s presence and guidance.

Finally, we’ve just received word that B3 is also entering the 3d Printing space! I suppose this isn’t a surprise, as the enterprise-level machines that are coming on line can print a variety of materials and densities, from the typical ABS plastic to faux wood-grain and beyond. It should be interesting to see the tack the studio takes with this creative tool. Miniatures of LARP characters, perhaps? More durable components for swords, frogs, and the like? We’ll be sure to check back in a few months from now and see what’s on the work bench.

One of the really neat side effects of having a full time LARP/SCA studio located in New England is access to materials. B3 has already come online offering Weapon Cores at a discounted rate in comparison to Goodwinds (the typical supplier) and, of course, being able to pick-up supplies on site reduces those $40 – $60 shipping costs on core. As the studio comes up to speed we can look forward to being able to purchase all weights and lengths of foam, finally getting us away from McMaster-Carr which, it has been noted, inflates its prices dramatically.

In addition, all B3 products have been tested by Sport LARPers for years and years. Yes, I know, I know. You really want to make your own big stupid ax. Trust me. EVERYONE who starts LARPing immediately wants to start with either the Hammer of Thor or a Halberd. Before you get couch-deep in tape, blades and glue do yourself a favor and buy a B3/Lotus Armory rep. These are *the* weapons of choice used by the best fighters in the hobby for reasons ranging from balance to durability. Sure, you could, perhaps, with skill, time and effort make a lighter weapon – you’ll also snap it 6 hours into the event. Go with a B3 and save yourself a tremendous amount of time and hassle.

Which of these creations is for you?

All of them. In particular, I’ll highlight the new Packet Archery Bow which promises to change the way Archery is conducted at New England Sport LARPs. Yes, yes…I know you think using golf tube arrows is awesome and more “realistic.” So is buying that size small condom, but they aren’t really best sellers, are they? For a variety of laughable reasons ranging from safety (nothing like dozens of arrow shafts cluttering a battlefield) to effectiveness (try carrying more than 8 of those) just stop with the desire to fire actual arrows at people and check out the B3 Packet Bow. It is amazingly accurate, has a fantastic range, and fires no harder than a well-thrown packet. http://www.b3is.com/product-page/a920fb20-2dfe-f373-c2a0-41be8b67c2ea

Admittedly, B3 used to make generic looking reps (except for those Bows, yo!) of the “paint it black and call it done” variety. With Alyssa lending her creative efforts in the studio to Kat Rigoli’s exceptional work on their website and marketing efforts to their combined artistic visions on weapon design I would expect the level of quality and personalization provided by the Studio to grow over time. Until that customization comes online, you will absolutely need a way to make your sword or claws stand out as yours (and not be immediately scarfed into a Monster Camp pile or taken home by the 73 other people at the event who have the same item). Grips are a great place to loop hair ties around. The hilts are Plasti-dipped and will take Liqui-tex paints wells. Worse comes to worse, silver magic markers of the permanent variety can be used to make a few distinctive highlights.