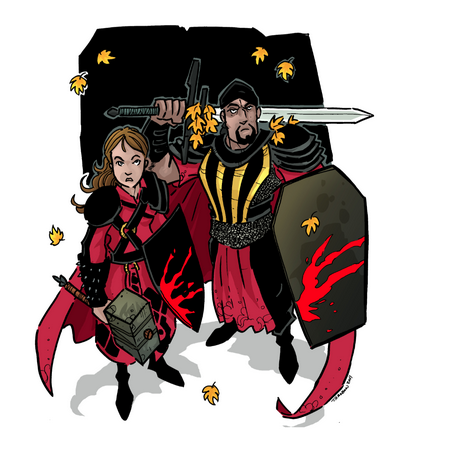 (because calling it a mission statement would be way too vainglorious, wouldn’t it)

I love LARP (not lamp, darnit!). Over the years I have been involved in a number of hobbies, from paintball to poetry, and none of them has captured my imagination and brought a healthy balance to my life like LARP. This would generally be the point in the introduction where I say something like “it’s the people, maaaaaaan,” but it’s far, far more than that. LARP is a life-engaging exercise for me that hits on pretty much every level, from imagination and creativity to crafting and exercise. And yes, there is a vibrant community. Unfortunately, the LARP polemic (and all communities face similar issues) tends to be publicly plagued by opinionated trolls, usually stout beardy men who always have a ready opinion but are rarely to be seen, say, when a clean-up task needs to be done or a late night module run. For too long I have sat back and said little on many, many topics. Primarily, this is because I detest the Facebook style of discussion and snap-back speed of retorts which seems to lead to poorly thought out but quick and sustained replies drowning out considered and informed responses. The primary adventure this blog will undertake is to create a space where many of the “arguments” which were concluded long ago (for instance, stop sending out NPCs to fight with goddamn short claws) can be briefly rehashed and linked back to whenever a troll needs to be fed.

The second adventure we will be undertaking here is creating a mentoring space. You would think this to be both arrogant and difficult to accomplish as I have no desire to allow or respond to feedback (except that which resolves factual issues or rumored inaccuracies) and that’s certainly a challenge. However, I just don’t have the time to truly call and respond to questions or even seemingly relevant points and I have no desire to get in to any type of perceived argument, which due to trolling, happens anytime anyone offers anything that can be taken even remotely as questionable. Instead the mentoring offered here will be anecdotal and self-experiential. I plan on sharing what I have done, why it did or didn’t work, and why it should or should ever/never be done again. There is a serious lack of mentoring in the LARP community, and often times those entering the hobby, starting their own games and designing their own modules make the same mistakes, almost point by point that I, and likely those before me, made in years past.

The other part of mentoring is that when it is offered, it comes with a poor explanations. This in turn, causes people to rebel against any apparent advice that is being offered and try to reinvent the wheel once again, if only out of spite.

The final obstacle to overcome is making sure innovation isn’t stifled. We have come up with a number of schemes to help us make it through weekends intact and to some extent that has begun to produce efficient formulaic events. Someone has to break some molds. Hopefully by understanding why we have chosen to present games the way we do those mold-breakers will smash them apart and reassemble them in all the right ways.

Lastly, this blog will provide a space which I can share some insights about the New England LARP community and the resources available to us. As the number of games expands, the basics such as campsite reviews and links to reliable suppliers of gear, have never been gathered and scrutinized. Because these types of reviews and critiques are not the focus of any one game but seem to exist as a secondary or even tertiary encounter, once they are created they are not updated or maintained. I’ll seek to resolve this as well as compare and contrast the different types of LARPs available in the New England area. No matter what games you attend, every game does something better than every other game out there. Sometimes it’s just a matter of matching the player with the system, instead of becoming frustrated trying to fix perceived shortcomings. And somewhere in the midst of all this I even plan to have a little fun!