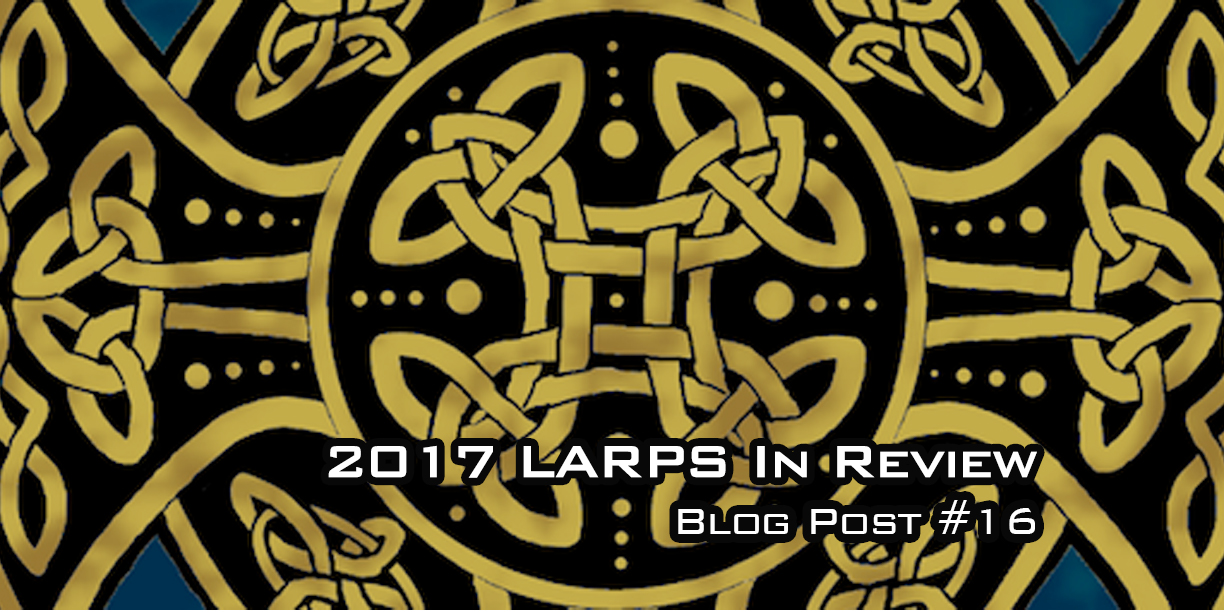 2017 was quite a year in the New England Sport LARPing community. New sites, new games, and an expanding community…

2017 was a heck of a year in the New England Sport LARPing community. The TL:DR version, to go along with the Ultimate New England Sport LARP Calendar (which is nearly complete) is as follows; new sites, new games, and a community that continues to expand at a prodigious rate! For once, we’ll start where we should, at the end of 2017, and work forward towards 2018, with a final overview of all the campsite news that’s come to pass, and some notes on the spreading of the community into other ventures. Onward!

A record number seven games finished out their arcs in 2017. For the first time, ever, the overall number of offerings may actually decline in 2018 (…ok, probably not). Outpost, which always featured sold-out events, and actually offered cash to NPC their closer (!), finished their planned 3 year arc amidst a number of heart-wrenching storylines and what appeared to be a pie fight. Mistgate, the Southern New Hampshire State University event that grew out of a college campus and on to actual campsites, as well as its brother-in-arms game, Legendary Library, both wrapped up this year, dispersing a new crowd of young and enthusiastic participants out into the greater community (but may continue as Ebonrock?). Clockwork Skies, the sequel to the Calling, concluded as planned and transitions onward to Clockwork Seas (as discussed below). Fifth Gate, owner of the most successful Kickstarter for a game, wrapped up their 3 year planned arc and game with a 4 ½ hour field fight. Always on the cutting edge of the intersection of LARP and technology, Occam’s Razor, fondly remembered for having so many character options you could actually play a ‘Highlander’ (like, from the movies!) wrapped up its 3 year campaign. And, finally, Ballad, the ‘each event in a different historical time’ game completed its one year run.

LIONE: the Crusades saw their first modern campaign setting come to an end and are immediately heading in to their second, with a character creation day in January for anyone who wants to get in on the ground floor.

Alliance Deadlands concluded their long-running campaign this fall and we’re all interested in seeing in which direction the NH Chapter moves in.

On top of all of this, NERO Boston – Volta went on hiatus and NERO Massachusetts Ravenholt (not be confused with NERO.World Ravenholt) also paused to regain some traction after the third NERO schism – hopefully both long-running campaigns will return shortly. NERO Southern Connecticut (Ashlynn) continues to go extremely strong, recruiting new players and even running a large regional event last fall.

Expanding genres is the name of the game for 2017, with shifts away from stock fantasy/sci-fi and into alternative timelines and time periods. First up, Attaway, a Deco-Punk LARP (I didn’t even know that was a thing!) pairs high society with immersive storytelling from the well regarded Be-Epic community base.

•Angel Fall adds to Winged Throne’s panoply games with their heavenly settings where Angels are certainly not what they seem.

•On the fantasy side, Myth, the long awaited game from the Mythical Journeys creators, finally kicks off its much ballyhooed schedule, complete with perhaps the most gorgeously photographed rulebook one has ever seen.

•And finally, Secrets of Caldera pulls together a number of veteran LARPers from such prior games such as After the Fall and Realm of Requiem to spin out an entirely new endeavor.

We spoke a bit about this last year, but the LARP hobby is evermore expanding out into more and more community events. The team over at Incantrix Productions (Caroline Murphy and Friends) have been running a steady number of ‘Haunted Mansion’ type events for a few years now, complete with fantastic looking costumes and even better whiskey. But this year has seen even more of these LARPer lead events take off, such as:

•Magestry is running a Villainous Valentine’s Day ball.Neal Belt the Third has opened his own gaming store!

•The Nexus began in Pawtucket but recently moved into Providence itself, offering not only table-top, role-playing and miniature games, but also an indoor space to stage role-playing events of Sidereus and even concerts by the Furies.

•Michael Golosokover and Bill Tobin have reached episode 100 of their LARPcast Podcast about all things LARP related.

•Jeremy O’Neil, a former LIONE participant and the ‘Black Knight’ on Full Metal Jousting, as well as owner of his own mask studio, has begun running wizarding world themed events out of the former Higgins Armory in Worcester (ever since the large collection of private arms was whisked, along with its curator {Hi Bill!}, across town to the Worcester Art museum).

•A number of the participants of Mythical Journeys (I think? At least that’s where I heard about it) are running the Winter Fae Inspired Frost Moon Feast at Bill Miller’s Castle in Brandford, CT.

•And, as always, the Mythical Journeys owners continue to provide the absolutely best point of recruitment into the hobby with the Robin Hood and King Arthur Spring and Fall Renaissance Faires, now both in new locations more central to New England!

•Kaza, aka LARPGirl, has created a Patreon that allows her growing audience to keep up with her many adventures to far-flung events like Armistice Arcane while, at the same time, sponsor her to come to their very own games.

•Also filed in this section, under “I have nowhere else to put it,” I do need to mention Legends of the Stars, a Star Wars inspired annual LARP taking place about an actual battleship, run by the excellent Lux Faros.

The real story of this year, however, has to be Michael Pucci and the Imagine Nation Collective. Beginning with Dystopia Rising (and a full set of table-top role-playing books to support the setting and the LARP, most recently in a newly announced partnership with Onyx Path Publishing), unveiling Utopia Descending (drone racing!) and now venturing into something like 12 custom one-shot events spanning the USA, (literally! They took a set of players on an epic road trip as part of a faux rock band!) INC (I see what you did there) is the hottest ticket in town right now. With Blog posts directly from the owner, to contributing members starting their own community support sites, the INC developers have become an unceasing creative juggernaut across many mediums.

2017 was THE year for camp sites. As our hobby continues to expand, the need for LARP-centric, or even LARP-friendly, campsites continues to grow. Several times in 2018 we’ll have ~8 full weekend events running simultaneously in the New England area. Luckily, there are host of campsites that refined, expanded, updated and just began creating their offerings this year.

Over at Ye Olde Commons , Puck managed the raising of an impressive set of standing stones, with the rehabilitation of several of the smaller woods buildings under way. Boasting a nearly sold out schedule, between games, weddings, and other events, there are still a few dates left in 2018.

Camp Sidereus finally has a home in the Berkshires. After multiple rounds of fund-raising, E. Neal Belt the Third unveiled the raw land that will, over the course the next several years, be transformed into the sprawling, faction-based home of not only Sidereus, but, eventually, other games that are looking for a site in Western Mass.

Joseph Blackwood over at Chronicles, with the best website name ever (ctlarp.com…how did no one think of THAT before?), continues to work on his site, adding bridges, stairways, and, eventually, buildings. While only a day site so far, this woodsy, centrally located area holds lots of promise for the future.

Up in Maine, the Burgundar site continues to expand, adding rustic dwellings, fire pits, tents and running more games each year. Upstate a bit at the MASI site, the Gate House that stood for the last 20 or so years, having survived having a trebuchet fired at it, and been the site of many pitched battles for over a dozen different games finally breathed its last. However, a new one is already in the offing and may actually be standing already, ready to welcome the next generation of LARPers home.

The true success story for 2017, however, is Eagle Pass in Wales, Ma. Begun years ago, and run for some time as a site with a single, large tavern, Eagle Pass knocked it out of the park this year, completing 2 large module buildings, heated AND air conditioned housing for 120 players, a multi-story staff building with on-site, rentable storage for games and the cleanest bath house you will ever see with individual stalls with actual doors. The only so designed specifically, from the ground up, with LARPing in mind it’s… gorgeous. Their schedule is filling up quickly, but I know there are still some prime weekends left…and with a fully winterized (and did I mention air conditioned?) site, they are rentable year round!

Leading us off is B3 Imagination Studios, who is going gangbusters. Capable of supplying the SCA, Dag/AMTguard and Sport LARPs, Ben Becker’s statement for 2018 is “challenge us.” And considering he may have single handedly broken Biccoline’s siege weapon system by making accurate, fast firing “Capt’n Janix brand” portable cannons, B3 seems quite capable of rising to meet any request.

Caleb Hand, of Made by Hand Leather, continues to be a distributor for Epic Armory along with his own hand-made leather goods. In addition, he, too, is a participant in Biccoline and even hand-built his own two story, period appropriate cabin on their site north of Montreal!

As previously noted, Jeremy O’Neil not only runs community events at the former Higgins, but also owns O’Neil FX, a high quality mask and props workshop with attendance and a number of major conventions around the area.

Also at conventions you’re like to run into Heidi Archer, of Meloria Maille, who specializes in themed chain and anodized scale combinations with themes from across the pride and geek communities.

That should do it for the yearly round-up. We’re still waiting on a good 10 games to update their 2018 schedules and we expect to have those on the calendar shortly. As always – Attend games. Patronize the Connecticut Ren Faire. Learn Crafts. Realize our community is all-inclusive. Use the correct pro-nouns. Rock On. This is a great time to be a LARPer.