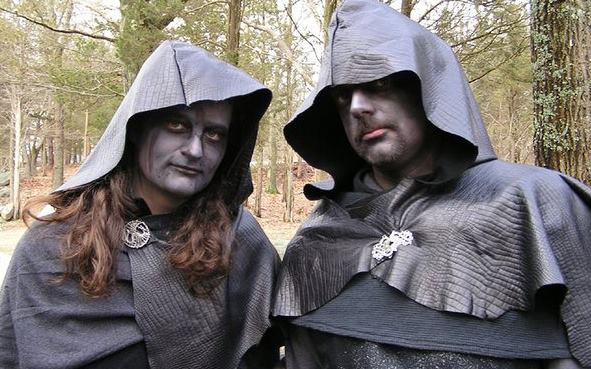 Right about this time two years ago the New England Sport LARP scene ground to a screeching halt. While many activities were impacted as the shutdown roiled through every facet of our lives, few were as utterly and unceremoniously cancelled as New England Sport LARPing (aside from theatre, cruising, all in person events…wow, damn near everything). Along with the wholesale suspension of games came the broader effect on the camp sites supported by such ventures (one of which closed and another of which has some…potentially COVID-isolation induced stewardship issues, shall we politely say?)  and the local retail market that caters to them. All in all it was a giant mess.

Even two years later, and with a commonly available vaccine regime, the idea fundamental to a weekend LARP (sleeping in a tightly enclosed space with up for 16 other people for multiple days) feels alien. While mask wearing has always been prevalent among the community (especially important for your 7th NPC role of Saturday) and combat has been encouraged to take place at a seemingly un-ironic 6 feet apart (give or take you never-clever short claw fighters out there) the simplest and most enjoyable community building aspect – that of sharing a living space and meal times with a hundred or more people over the course of a weekend – let alone the many tavern-based traditions, has been lost for the last two years.

Before we head into the LARP Calendar for this 2022, we’ll take a bit to look around the community, see the response to COVID, the plans for re-opening, and spend some time savaging the anti-vaxx neck beards who were nice enough to self-identify themselves right out of most games.

With the suspension of all in person activities in 2020, the community largely responded in one of three ways. Firstly, any game that had not yet launched (Fealty, Terres Rising’s relaunch, Cottington’s 3rd venture, etc.) simply pushed their start back until the Fall of 2021, or later. They maintained enthusiasm by re-hashing rules and background documents and hosting online meet and greets.

Second to that, many games that had an active schedule moved to an entirely online experience, usually on Discord. Some ran discussion forums with current staff and put additional lore into play. Others, however, began a wholesale shift to online-based play for 2 years. Generally centered around “Tavern” style roleplaying sessions, games such as Dystopia Rising MA, Aralis and Ebonrock actually advanced time and plotlines throughout these years.

Finally, in 2020, some games actually managed to run a live event or two! In New England this was primarily occurring up at the Burgundar site and catered to a very small and specific group of local participants from Maine (a ‘pod’ so to speak). Looking further out, a game in New Jersey and one in Pennsylvania also somehow managed to run an event at a public site – and although there were rumors of a COVID outbreak and much tut-tutting online, both of those larger games simply ignored their detractors and carried on.

Re-Engaging with the World

With the arrival of 2021 and a readily available vaccine, it seems that most games were gearing back up for the Fall season. Campsites in most New England states allowed for overnight stays for their summer sessions, social distancing guidelines dropped and mask requirements were being waived for outdoor areas and for people who have been vaccinated, as long as other guidelines are followed. As this trend continued, the community generally opened back up by September. New games launched, and some of the largest ones ran multiple sessions without reported repercussions. However, a select number of games which draw diverse participants from a nearly half-dozen states outside of New England carefully weighed their options and decided to cancel the fall season, especially with the uptick in the Delta and then Omicron variant.

Re-opening required the general consensus that proof of a vaccine was required to attend most, if not all, offerings (some further afield even required a negative COVID test). Unfortunately, this left out the folks who cannot get a vaccine (due to prior medical issues and, sometimes, hilarious, ‘religious’ exemptions – whatever the hell those are), but even they have already begun brainstorming with their communities about how they can still participate – setting up a “streaming room” in an In Game location, for instance, where players can step aside and “commune” with others via a well-disguised iPad and Zoom session.

Out of all the games that have publicly released their participation guidelines I believe that Madrigal has summed it up the best:

“Save your vaccination cards! Our events will require proof of vaccination.

That said, one of my biggest fears for the upcoming fall events is the pain of dealing with vaccination cards. The next event is going to be hard for my dedicated but understaffed crew. The campaign has lost all its momentum. The players will be coming in to new plots and new adventures. No one will remember anything.

So after spending 12 hours loading, unloading, and setting up, Friday night is going to be painful when someone(s) forgets their card and I have to send them home. Especially since most of our players have traveled far. Seriously I am going to feel terrible, but I have to do it for the safety of everyone involved.

If you are traveling from far away, or just want to be sure, I will be looking for a way for people to give proof pre-event so they don’t have to stress about it.

Also, I don’t think there is anyone who would do this but if you know of someone who plans to show up unvaccinated and use Friday night as an opportunity to voice their opinion that I am infringing upon their freedom please, for the love of god, tell them not to do that. Trash talk me on the internet if you must. Friday night, when I have an event to run, I will send you home but it will bother me and it will just make it that much harder to recover and get into running a good event for the players.”

In reading that statement above it’s important to note that final paragraph. Because if COVID has shown us one thing, it has let us know who all the mouthy anti-vax dumpster fires are in our beloved community. Early on, some mouth-breathing degenerates decided to go ahead and highjack a thread over on the New England LARPers page and spend the hours before their Men’s Rights meeting attempting to talk down to their betters. Seriously, can you imagine one of these “But muh Freedoms!” adolescents showing up to your event? Unfortunately, the answer is, “yes, we can” because it seems they had been attending events right up until COVID hit. So, the one positive coming out of COVID is these mentally incapable slobs with a child’s understanding of the world have publicly self-sorted themselves out of the New England Sport LARP community because, really, can you imagine having to pull one of these numb narcissists aside at 1am on a Sunday to discuss them not taking their hits? Good riddance. We stepped on your Snek.

What will 2022 bring? It’s hard to say at this point. New games are stepping off with an enthusiastic following. Ongoing games seem to have kept their player base; but just as easily there are some cracks out there. This will be covered in the Calendar Post, but I think some games are just going to quietly fade away. And while player numbers will be steady, I worry about the NPC side, where I think attrition is likely to strike the hardest.

So how do you LARP Hack COVID? As noted above, several games have shown success with Discord-style role-play sessions, but the real winner has to go to a neat little invention by LIONE (I think…).

See, one of the big issues around LARPing and COVID NPC-wise is the not-unbelievably-gross-until-you-think-about-it practice of sharing communal costumes and masks in monster camp. Previously, monster marshals had tried everything from dunking masks in an anti-bacterial rinse to spraying them with Lysol (and totally not burning the next wearer’s face off). But, in the heat of the moment, be it much needed wandering field pain or hastily stated set battles, everyone just sort of hoped the previous wearer didn’t have cold sores and then didn’t act terribly surprised when like 20 people came down with ‘Con Crud Monday morning. However, with COVID simply erasing everyone’s comfortability with easily communicable diseases, LIONE assigned each NPC a large, paper bag, had them write their name on it, and then place anything they had used over the course of the weekend in it for later personal re-use and cleaning. A pretty brilliant work around if you ask me…as long as you have access to 20-30 individual masks and tabards…or someone doesn’t might playing Skeleton #4 for the 11th time that weekend.