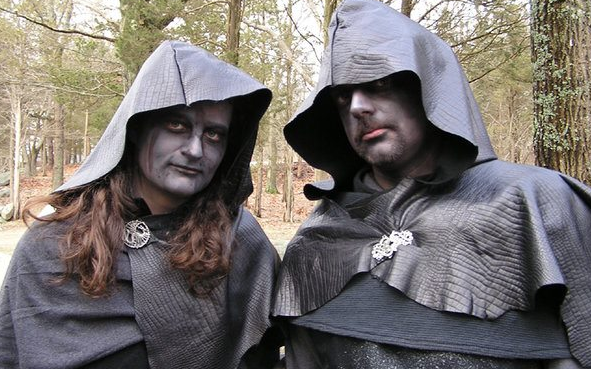 So who am I to pretend to be an authority?

Primarily I am someone who is just tired of Internet Know-It-Alls and strange Danes shitting all over the vibrant North American LARP scene (yes, their Orcs look cool. Yes, they’re actually “in play” for like 6 hours at a go. Welcome to your non-24-hour immersion, please enjoy your stay). I could just delete my Facebook account and call it a day, but unfortunately Facebook and its resultant groups are the way many people organize and form communities, and at its core LARP is all about community and memes.

I’ve been gaming since I was about 6, starting in the golden day of table tops and lead miniatures. Since then I’ve played everything from MtG to Vampire: the Masquerade to Ultima Online (look man, it was 1997) until I found LARPing.

As much as I had an apparent doppelganger who attended NERO Mass from 1992 onwards, my first game was actually Atlas Agenda as an NPC, followed quickly by Madrigal as a PC, both in 1999. From there on in I was hooked. For the next 8 years I tried to play or staff every game running in New England, at one point spending something like 38 weekends at a LARP. It helped that there were a LOT fewer events back then. While I bought all my costuming and masks, I had an affinity for making boffer (ick) weapons and props from my earliest of days. I don’t know where this really came from; I’d never consider myself handy or crafty and still don’t. Like I said, I just like LARP and all things associated with it.

Around 2007/8 my wife and I started a Renaissance Faire business called Xeph-Ink which sold Celtic Tapestries and costuming. Much like LARP, I poured all my efforts in to it and, at one point we were doing Festivals, Shows, Pride Days and Psychic Gatherings about 35 weekends out of the year. Needless to say my ability to attend LARPs dropped off significantly. When I returned to the hobby in 2014 (to take a year away from Faire) I was amazed to see how significantly it had grown! People had developed new systems. Whole campsites were being constructed. And as much as the number of events had caused a fracturing of the hobby, overall attendance was up, up, up. And along with all of these new participants I saw the rise of a host of easily avoidable mistakes and the expansion of the loud and persistently narcissistic supposed authority figures who I never had really seen contribute much of anything during the time of their much vaunted but poorly worded experience. My first reaction was just to withdraw from general discussions. But instead I have decided to re-up in a fashion that I feel I at least have some control over.

As a final note on bias, my first game system was Accelerant and I’ve been both playing and then staffing Madrigal for 22 years. I feel that the core concepts and rules of Accelerant are the best out there for LARP: they are stream-lined, at the base not overly complicated, and designed with solid principles. I will make every effort to try to suppress this bias when I can as a number of other systems provide intriguing alternatives, and when I can’t, I’ll be certain to note it.

While there are some old hands who may have attended more actual events than I have (the LIONE, MJ and NERO crews come to mind) I feel I am uniquely positioned to have experienced a much broader range of LARP than most.

In addition, as much as I am not an artist – I am a crafter who has made or repaired (and even occasionally sold, instead of donated) hundreds of boffer (blech) weapons. I am currently working my way through leather, uh, work because after a while it is far easier to make your own masks then buy them and boy do I love masks.

In conclusion, am I the end all, be all? No. B3IS is far better at making and selling LARP weapons than I will ever be & Rob C. has written circles around me when it comes to mechanics and rules. For sheer production, Brent and Mickey have run something like 400 NERO events. Blue, Brit, Caro and the Be-Epic team have more steamy technical knowledge than I could ever hope to learn, while Josh and Maurice from Monster Camp (as well as Scott, Lucas, and Dan, of their own accord) have done things with latex masks and weapons it would take me years to learn. I know upon whose shoulders I stand when I speak on a lot of these topics. But at least I’m finally finding my voice. So let’s go on an adventure.