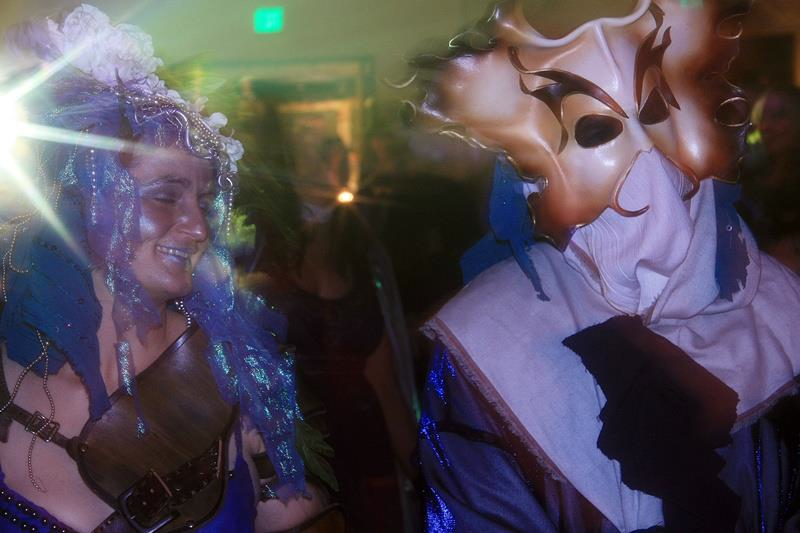 Making NPCing a LARP better, $5 at a time!

A rare pro-positive article here on the adventure blog, this week we’ll take a look at making your game (and others) more enjoyable for the low low cost of $5. Often times getting into, getting more out of, or perfecting your participation in a hobby can come with some serious financial layouts. However, there are some very basic tricks which can immensely increase your enjoyment and add to the immersive atmosphere for somewhere are $5 (3.93 Euro for now…but just wait until Greece defaults and then it will be like 103 Kroner…or 2934 whatever-the-hell-they-use-in-Finland…herring…scales?).

Congratulations! It’s been a few events. You now know where to park your car (or to be dropped off by public transportation/caravan for all our Euro friends in tiny, tiny countries), how to find your cabin in the dark, and how not to trip over your own feet in combat. Likely, this is the time in which you begin considering NPCing a game…and welcome to it! Likely a game has CP (Character Point) exchange with your current game and a day outside chasing others around with weapons is far, far more rewarding than staying at home and eating until you feel badly about yourself (campsite food being notorious for encouraging dieting).

At this point you’ll get the first peek behind the curtain of a LARP, into the dark, strange, mysterious and somewhat odd smelling area that is known as Monster Camp. You’ll quickly learn how to do things with duct tape that would make the author of 50 Shades of Grey and/or your local auto mechanic blush, be called upon to role-play some…thing? hopefully a person, with less motivational direction than an extra in Road House and engage in combat again and again. Somewhere during this indoctrination you’ll discover that all games like sending out a variety of creatures, usually identified by a certain color tabard and face make-up OR, and this is key, a communally shared rubber-ish mask. Whether you’re a psycho clown, a goblin, or a mutant you’ll be thrust into a Lysol-ed mask (if you’re lucky! If not, you can just hope that whatever is running down the inside of the mask is water and not whatever “Gordon” had for lunch before they made him run across the field, hint, it’s always something with garlic…probably mashed potatoes or, dear god, a hard-boiled egg) and sent out to battle players for up to 2 hours at a pass.

Seriously. Every pharmacy, retail outlet and Halloween store has several pegs of half-masks available from, say, August until just after Helloween. For $5 you can pick-up “that” generic undead mask. Every game, seriously, like *every* game has “undead” as an antagonist. If you want to cover your bases into the post-apocalyptic genre; grab a zombie mask…zombies are big right now (they’d be bigger than Steampunk, but having a prosthetic eyeball hanging off your face won’t get you laid ½ as fast as a top-hat and a cravat). Write your name on it, preferably in the most permanent marker available, and never let it out of your sight. Having your own mask will not only allow the game’s limited resources to be made available to other folks, but it will keep you from ever having to put on the face-bleachingly awful make-up most games tend to use (and tend to remove with a rag dipped in toluene they call “baby wipes”). In addition Gordon just had cilantro seasoning and, as we all know, no one likes Mask-cilantro (right XZ?).

It’s been two years and now you’re rocking it. Likely you’ve gotten a number of available people’s phone numbers and have really gotten into the hobby. You’re playing 2 games, NPCing a third (possibly a 4th) and your costuming is coming together quite well. With role-playing shirts in several colors (not just black!), some light armor, and a patchwork jacket your selfies are starting to make you look like a badass. And then, one afternoon, as you’re diligently slogging uphill against a PC pike wall, you look down and realize, shit, you’re still wearing sweatpants.

Now, you could be OK with this. After all, no one’s enjoyment of a game has been influenced by the trousers of recycling goblin #7, but you’ve got some personal pride at stake. What you *should* do it buy a decent pair of wrap pants (but those cost about $20 and this is the $5 article) because they help break up the silhouette of the leg better than any set of trews or, god forbid, “hose.” Unless you are a fireman, never wear (a) hose. Ever (unless you’re *just* wearing your hose in which case…carry on!).

What you actually do it get some extra fabric (which you should have hanging around by now) in dark grey or black, that sewing kit you stole from the hotel during the last wedding you attended (where you so totally did not hit on that guy because he was married…*out of game* at least), and sew some patches on to those sweat pants. Seriously. I know there are probably a lot of eyes rolling right now, but I maintain that baggy sweat pants are a generically awesome (and cheap!) set of LARP pants. And making them look in game is as simple as sewing on a few patches. Patching the knees is especially handy as dying repeatedly as an NPC will have you dropping down and popping back up dozens of times over the course of a battle, let alone an entire weekend. Even better, as a base layer for a PC, patched pants give you that extra “layered” look under tassests and greaves which can really elevate your garb.

By now you probably run your own game, or are at least on plot for one. Your license plate may be your favorite game system/baronial title and all your e-mail addresses are likely named after at least one of your characters. What can I possibly offer you for five whole dollars? A lot, actually.

At this point you’re playing multiple NPCs roles across several games. In fact, you probably have to carry 4 different shields to each game just in case your King’s Champion is needed this weekend. You’re beginning to have trouble distinguishing between your NPCs…you’ve tried hats but, at the end of the day, it just looks like you in a different chapeau. No, you’ve settled on using masks, like many of us have. Leather Masks are a great way to distinguish NPCs from each other and, at times, to keep players guessing. But there is one thing lacking…and it costs $5 (or less)…

You need a face veil. A face veil (aka a hood or bag) is made from a mesh-like see through black material. It goes over the head like a bag and hangs down to just below the neckline (because a lot of compelling costumes have very, very poor necklines). Worn under a mask, the veil totally obscures your eyes and face to anyone looking at you and, at the same time, allows you to see out without making eye contact. Face veils transform “Joe in a Mask” to “What the F is THAT?” Don’t get me wrong, if the idea of the mask is to promote “I’m a dude in a mask,” well, fair enough. But a lot of times a mask is used to represent something hidden, inhuman, and otherworldly. By obscuring your eyes and mouth behind a mask two things are accomplished: firstly, it allows the mask to REALLY stand out. It becomes the focus of the viewer’s attention and allows it to come fully in to focus. Secondly, especially at a distance, it protects your identity. Oh, sure, after a few events people “know” you “always” play a certain set of NPCs, but I’ve spent a good 4 events without newer players ever understanding just how many roles I am playing. In addition, there are two additional benefits: one, it prevents you from having to continually make-up your eyes, mouth and, most dispiritingly, neck. Out of all the pain in the ass places to keep make-up smooth, clean, and correct it has to be the neck. Two; and this is truly the advanced class, a veil allows you to *swap* NPCs, especially at a distance. When you really don’t know who is under a mask and a veil you can surprise complacent PCs by switching out an NPC role at a critical juncture.

As an example, here is a mask I made for my table-top game (I know, I know).

In first one, it looks like a dick in a mask.

In the second one, I am the Jack of Tears. See?

**Note: At night, you will need to either carry a very bright light source or snip tiny holes in the face veil to allow you to see out…these things absolutely KILL your night vision**

XZ has a different list than I do, by of being a pretty, pretty girl and also always cold, even in the summer.