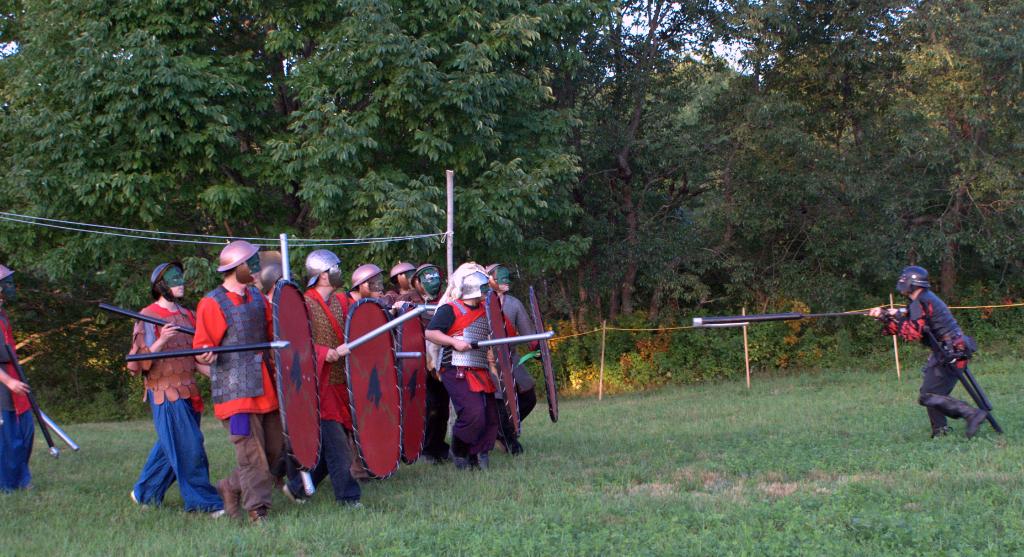 Sometime after about 10pm on Saturday night of a standard event, combat politeness begins to deteriorate. People are hyped up and yet tired. Environmental concerns like cold, wet, and even heat begin to pile up and exhaustion begins to set in. As the event naturally builds to a climax, the stakes are raised. The lack of sleep from an excited Friday Night spent up until 5am begins to impair judgment and the Saturday Night Shitshow begins. The SNS is common in all games and is characterized by overly aggressive fighting, an escalation in headshots (as focus begins to slip) and an enthusiastic grouchiness as PCs feel the need to succeed in climax (hey now) encounters.

Given all of this, there are a few simple things you can do to increase your enjoyment of this time:

-Chug Water: Now is the time to hydrate, hydrate, hydrate. As gross as that campsite bathroom might be, I’ll bet you haven’t used it since dinner, which was 5 hours ago. Drink some water.

-Replace caffeine with environmental stimulants: Likely at this point of an event, you’ve already had your FDA-irresponsible 9 energy drinks. Instead of hopping up on more caffeine, drop your cloak and be invigorated by the cool evening air. Or even better, stretch out and loosen up for what you know will be a coming set of encounters.

-Guard High: When combat does break out realize that people’s control will not get better as the night wears on. Minimize headshots by raising your shield and sword guard and becoming more active with your leg snaps. Assume someone will inadvertently swing for your head and have a passive block already in place- your standard, resting guard.

-Swing Low, Sweet Chariot: As the night wears on it is no longer the time to try for tech hits. That easy shoulder shot at the 9pm fight suddenly goes right at some NPC’s head at 2am. Instead, bring your attacks down. Aim for easier targets, like forearms. Or feint high and then snap low, looking to get around shields and hit legs. This will, all in all, make you a more courteous fighter. Above all, ease back on the thrusts. Behind the darkness and the lack of judgment there lurks a thrust that you just know will slip past a shield and totally not hit Mike Cranley in the balls. But it did. Again. Watch those thrusts.

To sum up and reiterate, the above is as this blog stated, both experiential and anecdotal. I’m sure someone once was almost in the cabin that was struck by lightning and caught fire (ok, true) and I’m sure someone at some other event drank 37 energy drinks over the course of 2 sleepless days and collapsed Sunday morning (also true). Despite all of this, and all of the above recommendations- LARP is a very, very safe hobby. And we’ll never mention the time we accidentally shot fireworks at the Atlas Agenda players. Ever.s